The Multi-level Universal Specification for Intelligent Constructs (MUSIC) sets out to:

Through adoption of MUSIC, training simulation designers can now separate knowledge capture from the specifics of the simulation environment. The figures below illustrate this premise. Figure 1 shows how knowledge capture is done today. Models are developed in many disparate systems using scripting, finite state machine representations, behavior trees or goal-directed cognitive models. Each knowledge capture effort requires a SME to work with developers, scripters, or knowledge engineers to define the intelligent agent for the simulation of choice. Those efforts must then be duplicated every time a new simulation is introduced. Figure 2 shows how MUSIC can be used to capture a single knowledge representation that applies to all participating simulations and provides a framework that can be leveraged by future simulation systems. 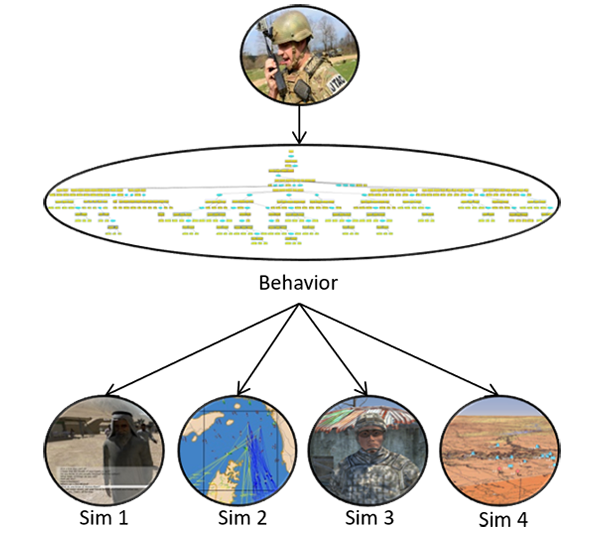 What MUSIC Is
MUSIC provides a standard that participating simulation systems (PSS) (e.g. simulation systems, immersive gaming environments, and semi-automated forces (SAF) systems) can adopt to gain access to intelligent constructs that can act within their environment. These intelligent constructs are driven by participating cognitive systems (PCS) that drive the construct’s decision making. Broadly defined, constructs include entities, such as vehicles, ships, or aircraft, but also avatars, agents and intelligent devices that can be leveraged within the participating simulation. MUSIC is a message passing specification that works with existing message standards, such as, but not limited to, High Level Architecture (HLA) and Distributed Interactive Simulation (DIS). These existing message standards are meant to allow a network of heterogeneous systems to communicate.